Earnings season is the time of year in which most publicly traded companies release their quarterly earnings reports. Each season helps investors decide whether they should buy more shares or sell based on how the company has been performing. And for this quarter, it has been a particularly exciting earnings season.

Corporate profits are at the highest they have ever been. That should be good news for investors because stocks aren’t quite at all-time highs yet either.  Despite the generally excellent reports, there have been several concerns weighing down the markets. Among those concerns is the possibility of a trade war with China and rising interest rates by the Fed. Let’s take a look at what a few favored companies’ reported: 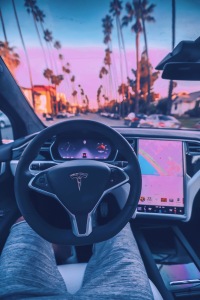 Tesla investors became acquainted with what Musk termed a “Flufferbot,” or a piece of machinery which places fluff in the battery packs of Model 3 cars. Musk blamed the breakdown of these machines and more broadly over-automation of the assembly line for delays in shipping Model 3’s to pre-order customers. Tesla was able to deliver 29,997 cars across all models in the past quarter. The problem facing Tesla is that only 8,810 of 500,000 Model 3 pre-order reservations have been delivered to customers since the beginning of the year.

Musk believes that Tesla will not need to raise additional capital this year, despite losing $3.35 per share in Q1 2018 which make it the worst quarterly loss in Tesla’s history. Also, Musk believes that the company will be cash flow positive and report a profit in Q3 and Q4 of this year. Analysts are skeptical, and shares declined on this news from Musk. The reason that Tesla stock dropped is perhaps mostly due to Musk’s refusal to answer analyst questions regarding Tesla’s capital structure, calling one analyst “boneheaded.” It was a performance Musk later said he regretted. Indeed, it may cost

Tesla investors if the company needs to raise capital this year through debt, and could mean higher interest rates for Tesla. Three brokerage houses downgraded the stock after the news.

It was not a pretty quarterly earnings report for Snap Inc., which lost $385M or 17 cents per share in the first quarter of 2018. Several problems that Snapchat faces may stem from its controversial app re-design, which upset users. Kylie Jenner is perhaps the most famous critic of the re-design, who tweeted in February tweeted she doesn’t even open the app anymore.

Snap had 191M daily active users, up 2.13% from Q4 2017 in the last quarter which is the slowest growth in company history. Revenues increased 54% year over year to $230.7M, but the slowing of user growth overshadowed that. CEO Evan Spiegel remained adamant that the re-design was the best thing for its users and the company long term, despite some near-term headwinds from user disruption.

Facebook had a blowout quarter, reporting $1.69 EPS against a consensus estimate of $1.35. Daily active users came in at 1.45 billion. The stock soared on the report, which was somewhat depressed following the Cambridge Analytica scandal. If you’re not familiar with the scandal, Facebook improperly shared the data of more than 87 million users through data harvesting. Despite the recent drama, Facebook is still in investment mode, looking to invest heavily in securing its platform in the wake of the data breach and in creating new experiences for its users. It has also been hiring for content moderators rapidly.

Apple – Shareholder Enrichment On The Menu

Apple had strong earnings season, posting a quarterly revenue increase of $16% to $61.1Bn. Earnings growth outpaced revenue growth at 30% YoY in a sign of improving efficiency, with an EPS of $2.73. It also raised the stock dividend 16% in line with the revenue increase.

Apple confirmed some of the detractors of capital repatriation tax cuts said – that the money will be used for shareholder enrichment instead of hiring workers. To this end, Apple announced it is buying back $100 billion of its own stock. This move was incentivized by a reduction on the tax rate corporations must pay on cash repatriated from abroad from 35% to between 8 – 15.5%. Nearly all of Apple’s quarter trillion dollar cash hoard is overseas, so the repatriation tax rate changes is a massive boon to shareholders.

Amazon may be a huge company, but it is still growing like a startup. Quarterly net income came in at 1.6Bn equating to an EPS of $3.27 vs. $1.26 consensus. AWS, Amazon’s cloud service division, grew at 49% YoY and was mostly responsible for the company’s quarterly net income. The price of Amazon Prime is also increasing to $119 per year. It was a picture-perfect quarter for CEO Jeff Bezos, and it’s hardly imaginable that his company could continue to grow.

If anything, the company could attract scrutiny for being too powerful. Critics say that AWS is unfairly subsidizing the retail operations of Amazon, as other retailers do not have a profitable, market-dominating cloud computing business to help stabilize their operations.

Nvidia – Watch Out For Upcoming Earnings

Nvidia is set to report quarterly earnings on May 8th, after the close for the Q1 earnings season. The consensus estimate is for the company to earn $1.45 per share. Nvidia has significantly benefited from the rise of cryptocurrency mining, and investors find great promise in it’s GPU assemblies for autonomous vehicles.

Alibaba reported strong earnings season results above consensus, and its stock continues to be a wild ride. The company earned $0.91 per share, above the estimate of $0.84. The company also took a 33% stake in Ant Financial, the world’s most valuable private fintech company. Alibaba indeed strikes many investors as being akin to a smaller, faster-growing version of Amazon. Alibaba’s cloud computing business grew 103% YoY to $669M. It’s core business increased 62% to a total of $8.2 billion. The company is certainly making moves, and its foray into the fintech arena with it’s Ant Financial stake is big news.

This material has been distributed for informational and educational purposes only, represents an assessment of the market environment as of the date of publication, is subject to change without notice, and is not intended as investment, legal, accounting, or tax advice or opinion. Stockpile assumes no obligation to provide notifications of changes in any factors that could affect the information provided. This information should not be relied upon by the reader as research or investment advice regarding any issuer or security in particular. The strategies discussed are strictly for illustrative and educational purposes and should not be construed as a recommendation to purchase or sell. There is no guarantee that any strategies discussed will be effective. Each investor should evaluate their ability to invest long-term, especially during periods of downturn in the market. Investors should not substitute these materials for professional services and should seek advice from an independent advisor before acting on any information presented.

We're so fun to hang out with on social media

Bitcoin or GBTC? How to decide …

Investing Is Only For Brokers With Fancy Cigars

How to Give Real Stock as a Gift

The Best Stocks for Gamers

The Best Investing Ideas for Beginners

How to Fix Your Worst Money Mistakes

How To Start Investing

Is Your Budget Affecting Your Happiness?

What is a dividend?

Bitcoin or GBTC? How to decide …

Investing Is Only For Brokers With Fancy Cigars

How to Give Real Stock as a Gift

The Best Stocks for Gamers

The Best Investing Ideas for Beginners

How to Fix Your Worst Money Mistakes

How To Start Investing

Is Your Budget Affecting Your Happiness?

What is a dividend?